Initiative on the UN Genocide

Initiative on the UN Genocide Convention

Please allow me to draw your attention to one of the most compelling issues in the international community: genocide and other mass atrocities. Over the last decades, many millions of innocent people in dozens of countries from all continents have sadly lost their lives in human conflicts. Despite all the instruments at our disposal and growing awareness, the international community has been unable to prevent senseless bloodshed.

As you know, Slovenia has witnessed such horrific events on its own soil. And even since the Convention on the Prevention and Punishment of the Crime of Genocide entered into force in 1951, there have been significant numbers of atrocities committed in Africa, the Western Balkans and many other regions. We have therefore committed ourselves to ensure that we shall ?never again? ignore extreme cases of intolerance that might result in mass atrocities that shock our consciences.

I fully believe that we have the opportunity and enormous responsibility to prevent such tragedies. We need a fast-track and concrete legal resolution to halt acts of genocide taking place across the world, as a continuation of the historic and invaluable work of the Polish lawyer Raphael Lemkin.

I am confident that the vast majority of the international community is ready to work closely with the United Nations to prevent future mass atrocities and bring any that do occur to a halt more effectively. I will, therefore, during my address at the sixty-seventh regular session of the UN General Assembly, propose the establishment of an intergovernmental forum composed of interested States, regional and sub-regional organisations and the UN system to develop a viable strategy to prevent genocide and other mass atrocities.

Dear friends and Colleagues, It will be of great value if You are able to support this idea by means at your disposal.

Slovenia is ready to start such a dialogue and convene its first meeting in the following months. These discussions should lead towards initiating a UN resolution setting a clear mandate to the international community for preparation and adoption of an appropriate legal mechanism that would strengthen current tools available for prevention of the crime of genocide. I should reiterate that our aim is not to undermine the work of other relevant bodies, but rather to complement them and to assist in achieving a consensus approach to address situations where genocide and mass atrocities have occurred or are likely to occur.

This initiative has already been presented to UN Secretary-General Mr Ban Ki-moon and it is my sincere hope, that you will find this proposal a valuable contribution to our common goal. I wholeheartedly believe that we have a chance to further explore the possibilities of joint action for the well-being of peoples and nations around the world. 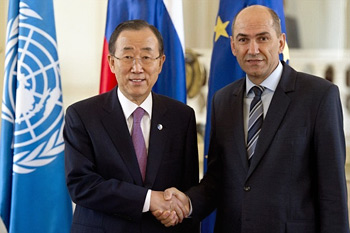