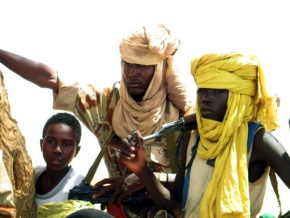 The Darfur Conflict is an ongoing guerrilla conflict centered in the Darfur region of Sudan. It began in February 2003, when the Sudan Liberation Movement (SLM) and Justice and Equality Movement (JEM) groups in Darfur took up arms, accusing the Sudanese government of oppressing Black Africans in favour of Arabs. On one side of the conflict are the official Sudanese military and police and the Janjaweed, a Sudanese militia group recruited mostly from the Afro-Arab Abbala tribes from the northern Rizeigat region in Sudan. The other combatants are from rebel groups, notably the SLM and the JEM, recruited primarily from the non-Arab Muslim Fur, Zaghawa, and Masalit ethnic groups. Although the Sudanese government publicly denies that it supports the Janjaweed, it has been accused of providing financial assistance to the militia and of participating in joint attacks targeting civilians.

There are various estimates on the number of human casualties, ranging from under twenty thousand to several hundred thousand dead, from either direct combat, or from starvation and disease caused by the conflict. There have also been mass displacements and coercive migrations, forcing millions into refugee camps and creating a large humanitarian crisis.

The Sudanese government and the JEM signed a ceasefire agreement in February 2010, with a tentative agreement to pursue further peace talks. The JEM has the most to gain, and could attain semi-autonomy. However, talks have been disrupted by accusations that the Sudanese army launched raids and air strikes against a village, violating the agreement. The JEM has said they will boycott further negotiations.