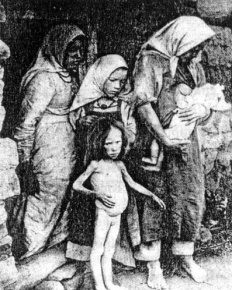 Ukraine declared its independence from the Soviet Union in 1917, but this autonomy was short lived, as Ukrainians then clashed with Lenin?s Red Army. After Lenin?s death in 1924, Joseph Stalin came to power, and in 1929 he ordered the arrest of 5,000 Ukrainian scholars, scientists, and cultural and religious leaders, who were falsely accused of plotting an armed revolt. These people were then imprisoned or executed. The Ukrainians were defiant while the Soviets tried to take over their farmlands, causing Stalin to impose harsher actions and to effectively starve the Ukrainians, as by that point the Soviets had taken over 75% of Ukrainian farmlands. By the end of 1933, over 25% of the Ukraine?s population had starved to death as a result of Stalin?s actions, and the entire class of Kulaks (higher-income farmers) were eradicated.