The Fall of the Berlin Wall 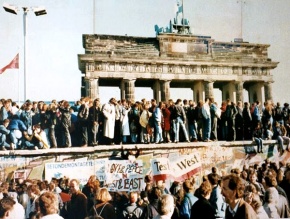 In August of 1989 Hungary opened its border with Austria, a flood of East Germans travelled into the West. Meanwhile, protesting students in Leipzig put pressure on the government to lower the borders into West Berlin. On November 9th, 1989 During a press conference Gunter Schabowski, Minister of Propaganda, read out a note announcing that the border would be opened for "private trips abroad?. The news spread like wildfire and thousands of people gathered by the checkpoints, demanding passage. There was some confusion as to what the official line was and the border-guards, uncertain of what to do and ill-equipped to deal with the mob, were forced to let them pass.