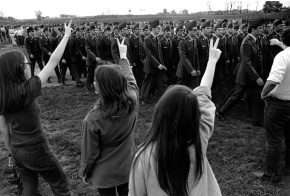 South Africa was condemned by the international community because of apartheid, and was subject to both economic and cultural boycotts. The 1973 military coup in Chile was followed by a move by the Government Junta to crush their left-wing opposition, with more human rights abuses being committed after General Pinochet consolidated his power. The "dirty war" in Argentina, a period of state sponsored violence that ran from the 1970s until 1983, saw a huge number of human rights violations, such as the disappearance of an estimated 30,000 people, torture and concentration camp, whilst in Cambodia, the Khmer Rouge presided over political executions, starvation and forced labour. People across the world protested against Arab-Israeli conflict, Vietnam War and Nigeria-Biafra civil war.