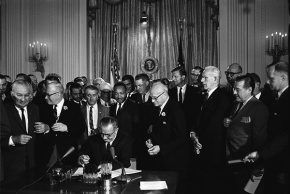 The Civil Rights Act banned discrimination in voting and jobs, and outlaws racial segregation in schools and other public accommodations. These invalidated the ?Jim Crow Laws? of the southern US, which mandated de jure racial segregation in all public facilities, with a supposedly "separate but equal" status for black Americans. Martin Luther King, Jr. won the Nobel Peace Prize in recognition of his action as a civil rights campaigner.