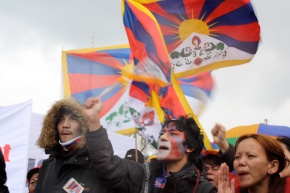 The People?s Republic of China systematically took over Tibet as a means of expansion, despite the fact that Tibet was an autonymous state with a unique culture, language, and religious beliefs. In 1949, the Chinese invaded and colonised Tibet, and from 1959 to 1976, the Chinese forcibly repressed any uprising, and began to perform mass arrests and set up labour camps for Tibetans. It was also during this time that all traces of Tibetan culture and religion were destroyed. It is estimated that between 1 and 1.5 million Tibetans were killed over this period of time, either being executed, starved, tortured, committing suicide, or in combat.