A Year for Human Rights 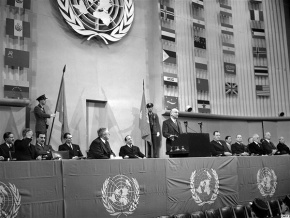 Throughout the year a number of important conventions were adopted by various international organisations, recognising the rights of marginalized, exploited and persecuted groups and affirming the universality of Human Rights.

In April, in Bogota, Columbia, The Organization of American States adopted the American Declaration of the Rights and Duties of Man ? a document that pre-empted the Universal Declaration of Human Rights by eight months. The Declaration stated that ‘All men are born free and equal, in dignity and in rights, and, being endowed by nature with reason and conscience, they should conduct themselves as brothers one to another’ and affirmed that the juridical and political institutions of all the states of the OAS should work to protect those dignities and rights.

On 9th July, The International Labour Organization adopted the Convention of the Freedom of Association and Protection of the Right to Organize. The convention recognizes the right of workers to organize and form federations without discrimination from employers.

On 9th December, The Convention on the Prevention and Punishment of the Crime of Genocide was adopted by the United Nations General Assembly. It built on the work of Polish lawyer Raphael Lemkin and defined genocide as the ‘?intent to destroy, in whole or in part, a national, ethnical, racial or religious group?’ The Convention exhorts all members of the UN to report and punish acts of genocide, whether they are committed during peace or wartime.

On 10th December, The United Nations General Assembly adopted the Universal Declaration of Human Rights. Along with its adoption by the General Assembly, The United Nations charged its member states to disseminate and proclaim the contents of the Declaration within their borders. The preamble of the declaration states that ‘?recognition of the inherent dignity and of the equal and inalienable rights of all members of the human family is the foundation of freedom, justice and peace in the world’.