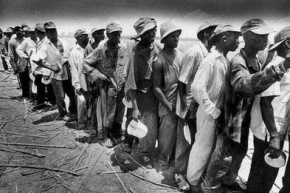 Dominican President Rafael Trujillo ordered Dominican soldiers to kill the Haitians living along the borderland. The orders were in response to Trujillo?s assessment that the Haitians were impeding the Dominicans enjoyment of life along the borderlands. As a result, Trujillo devised a plan to eradicate the Haitian population in what is now referred to as the Parsley Massacre. The reason the event has such a name is that Dominican soldiers would approach people holding a piece of parsley and ask them to name it. Those that could not correctly pronounce the Spanish ?perejil? were assumed to be Haitian and killed. Over a span of just five days, between 20,000 and 30,000 Haitians were killed. What makes this case interesting is the fact that many of the Haitians killed were born and raised in the Dominican Republic, and belonged to Haitian communities along the borderlands, which actually made them Dominican citizens.