The ILO adopts the Convention Concerning Forced or Compulsory Labour 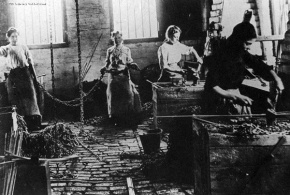 An important step towards the condemnation of forced labour was taken by the International Labour Organization. Set up as part of the Treaty of Versailles to protect worker's rights on a global scale, the ILO and its member countries denounced "all work or service [...] under the menace of any penalty [...]." The ILO earlier made signal contributions to the world of work as the most important international organisation in the field.

The first International Labour Conference held in Washington in October 1919 adopted six International Labour Conventions, which dealt with hours of work in industry, unemployment, maternity protection, night work for women, minimum working age, and night work for young persons in industry. Although it had been condemned as early as the mid-19th century, mankind faced force labour even after the 1930 convention. The elimination of its numerous forms - old and new, ranging from slavery and debt bondage to trafficking in human beings - remains a most complex challenge. However, the ILO convention was the first legal document of international relevance to address this issue and a source of reference of all later international initiatives in the field.