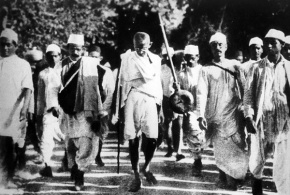 During colonialism, India was essentially ruled by the British East India Company, which attained almost full control the country by 1856. As a result of the growing national independent movement and India's First War of Independence, the British Crown brought the country under its direct rule. In 1930, in order to help free India from British control, Mahatma Gandhi proposed a non-violent march through India protesting against the so-called British Salt Tax, which made it illegal to sell or produce salt, allowing a complete British monopoly. Since salt is necessary in everyone's daily diet, everyone in India was affected. Before embarking on the 240-mile journey, Gandhi sent a letter to the British authorities forewarning them about their plans of civil disobedience. On March 12th 1930, Gandhi and his fellows started their 23-day-long journey. The peaceful Salt March started a series of protests, closing many British shops and mills. Ghandi and his followers did not defend themselves against police violence and many were killed instantly. The world, however, embraced their non-violence. Eventually, the march led to India gaining freedom from Britain.