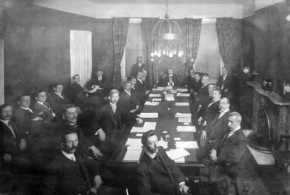 Between 14th November and 20th December 1907, following a proposal made by Mexico and the United States, five Central American Nations ? Costa Rica, El Salvador, Guatemala, Honduras and Nicaragua - took part in the Central American Peace Conference in Washington, D.C, sponsored by the Secretary of State to the President of the United States of America and Nobel Prize winner, Elihu Root.

Nations ended the Conference by signing a peace treaty, one aspect of which created the Central American Court of Justice (Corte de Justicia Centroamericana) and provides for aliens' right to appeal to courts in the country where they reside.