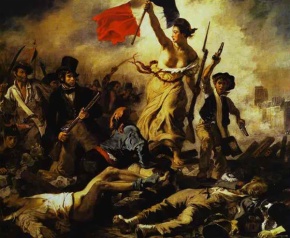 In 1789, the French crown called a meeting of the Estates General in order to impose new tax laws. The Estates General was composed of three ?Estates?: the clergy, the nobility and the rest of France. This 'third estate', informed by long-term doubts over the constitution of France, declared itself a National Assembly and decreed the suspension of tax, taking French sovereignty into its own hands. Its members subsequently swore that they would not relent until a new constitution had been agreed upon. Shortly thereafter, the assembly released the Declaration of the Rights of Man and of the Citizen, which established a proper judicial code and the autonomy of the French people.

Some neighbouring countries feared that the revolution would spread beyond France. In response, they issued the Declaration of Pillnitz, which insisted that they return Louis XVI to the throne. French leaders interpreted the declaration as hostile, so the Assembly declared war on Austria and Prussia.

In 1792 a second revolution took place, as Jacobins, led by Maximillien Robespierre, forced the Assembly to replace itself with a National Convention, which abolished the monarchy, declared France a republic and in 1793 executed the king. As the Revolutionary Wars went against France, and as the revolution became increasingly radicalised, the National Convention created a Committee of Public Safety to run France. This instituted an era called ?The Terror?, in which over 16,000 people were guillotined. When the French army successfully removed foreign invaders and the economy stabilised, Robespierre no longer had any justification for his extreme actions, and he was arrested in July 1794 and executed.

In 1795 a new constitution was drawn up, which created a new legislative system run by a Directory of five men. The Directory remained in power thanks to rigged elections and the purging of the assemblies before it was replaced by a new constitution in 1799 with the help of the army led by Napoleon Bonaparte. This created three consuls to rule France. Bonaparte was the first consul and, while the reform of France continued, Bonaparte managed to bring the revolutionary wars to a close and have himself declared consul for life. In 1804 he crowned himself Emperor of France.